I’ve finally reached a point in this revision where something has flipped mentally. In a good way. What I mean is that the story has finally taken over so much of my attention that it’s crowding out my ability to think about other, less important things. Like getting dressed. Take this morning for example. This is how I knew the flip had occurred. I was so intent on thinking about the story that after I had taken off my pajamas, showered, etc., I put my pajamas back on instead of putting on actual clothing. That’s bad. But it’s also very very good.

Here’s why: because for the past two years, it has been the other way around where it’s been a daily struggle to push real world worries and anxieties out of the way to make room for thinking about the story. I’ve been able to do it, but the effort shows, I think, in the amount of work I’m able to do and in the work itself.

The last few days have felt different and this is why. The work has finally pushed its way through the other stuff. And there has been a lot. Some big personal things but also watching American democracy  being dismantled has not been conducive to creative work. Not for me, anyway. And if you have struggled to write or create during this time, too, know that you’re not alone. I wish I could tell you how I broke through but honestly, I think it was just a matter of dogged determination. I will finish this book or die. Whichever comes first.

Anyway, yesterday I had one of those revision moments where I broke down and did a thing I rarely do. I have never been big on charts and graphs, the sort of thing where people lay out the entire book in colored sticky notes all over the wall in order to visualize…something. My brain doesn’t tend to work that way.

But this week, I had to resort to….colored index cards. Now mind, this is on a very microscopic level, especially in terms of this book, because I only used three! The thing is, I was floundering trying to rewrite a long scene that originally covered two chapters and involved multiple threads where three separate, important points were made.

I knew in earlier drafts that this scene/two chapters did not work. Critical information was presented in forced conversations. Nothing flowed naturally. It did the work I needed it to do but it wasn’t organic. I was jerking the characters around like a bad puppeteer.

This is always always always the problem. When I’m stuck, when something doesn’t feel right, 99% of the time it’s because I have been forcing the characters to say what I think I need them to say. When I go back and figure out where I started pushing instead of listening, I can usually unravel things.

But in this scene, there was too much going on and I couldn’t keep it all in my head. So I wrote down the three moments in the scene that weren’t working and the functions those moments performed, each on a separate index card: 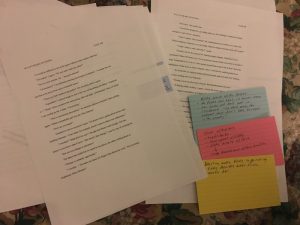 These are essentially three conversations my MC has with three different people. (Well, four, but two of them are together.) In the original draft, the order was yellow-pink-blue. Yellow was part of a conversation with a young man who is interested in her. Pink was a conversation with two sisters who upset her and sparked a bad argument with her own sister that has repercussions later in the story. Blue is a conversation with an older man that was pure info dump stuff, and originally, it closed out a chapter and the entire overly long scene. Yes, with an info dump. The whole thing ended with a dull thump.

Even rewriting that conversation to match the new theme didn’t help make that ending right and drive the story into the next chapter. And I knew that there was something in that conversation with the young man that could be used to better effect–because that conversation impacted the pink conversation because one of those sisters was also interested in that young man. But I couldn’t juggle them all in my mind and get a feel for how they would flow one into the other.

But writing them out clearly and then shuffling them worked. I had the answer in two minutes. The info dump is less of an info dump but hey, you still need info dumps. Only now it works because it serves to mix up my MC even more so that it’s believable that she would snap in that pink conversation (er, no I didn’t purposely make the conversation with the woman pink. I swear they came out of the pack in that order.) And then she takes that anger and spite into the yellow conversation and uses it to do something foolish and then THAT is the end of the scene and chapter. She makes a foolish choice and is still angry and that anger will inform the next scene exactly as it should.

Whew. Trying to keep an open mind about various methods. Sometimes it works.